Once your cancer is diagnosed it generally has bested your immune system sufficiently to have developed beyond the microscopic in situ stage and is large enough to be detected via screening methods or cause symptoms that send you to the doctor for answers.  It may have spread to nearby tissue or, depending on its stage, migrated further afield.

At whatever point you learn of your cancer, you’ll want to make sure that you follow a cancer fighting diet that combats the cancer on all levels. 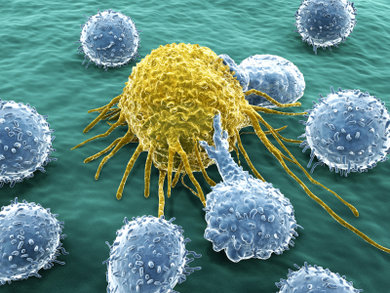 Any successful cancer fighting diet should support, if not enhance, whatever medical treatment you and your health care provider decide is right for you. An integrated approach that takes diet and lifestyle and weds it to the most effective of the conventional treatments can be a powerful approach to regain health and feel better along that cancer road.

Because there are multiple causes for cancer and reasons for its spread, any cancer fighting diet and cancer supplement program will have to succeed on several fronts.

While you will still follow the essentials of a cancer prevention diet and keep in mind some general guidelines regarding cancer and nutrition, you’ll want to take the following additional steps to ensure that yours is a cancer fighting one too.

Angiogenesis is the growth of new blood vessels that supply a cancer. They are essential for a cancer to grow. The fragile nest of new vessels supplies the cancer with fuel -oxygen and nutrients – and removes waste, without which the cancer would not get any bigger than a speck.

One of the key pharmaceutical strategies to discourage cancer promoting angiogenesis, especially with hard tumors like breast, prostate and cervical cancers, is anti-angiogenic drugs that inhibit blood vessel growth.  These include the scandal-plagued drug thalidomide.   You’ll recall it was thalidomide’s anti- angiogenic effects responsible for the monstrous deformities in children whose mothers had taken the drug in the 1960’s to combat morning sickness during pregnancy. It’s had a second life as a cancer fighter.

With respect to a cancer fighting diet, several nutrients found to have an anti-angiogenic effect and which can play a role in both

Consider the below in any cancer fighting diet.

One of the most effective anti –angiogenic foods is soy, which can come in many forms including tofu, tempeh, miso , soy sauce ( tamari) and soy milk.  Soy is a good bet as part of both a cancer prevention and cancer fighting diet.

With respect to soy’s cancer fighting diet role and anti-angiogenic effects specifically, researchers believe it is the isoflavone genistein that inhibits blood vessel growth.  Genistein’s anti-angiogenic effect is one explanation for the low incidence of breast and prostate cancer in Japan compared to other industrialized countries. There the intake of soy and, for that matter, catechin- rich green tea is high.

Interestingly, when Japanese move to the West and supposedly begin consuming a more Western diet, the risk of prostate and breast cancer increases substantially within a few years.  This suggests that, with fewer dietary anti- angiogens, pre-existing cancers begin to grow unhindered.  Researchers theorize that the anti-angiogenic compounds in the Japanese diet are one factor keeping these cancers in check.

Researchers looked at the anti-angiogenic properties of cartilage extracts because cartilage is tissue in which no blood vessels grow.  This lead researchers eventually to shark’s cartilage which has more potent anti-angiogenic properties than cartilage of other animals; the shark, unlike other fish and animals, effectively is immune to cancer. There is some evidence that shark cartilage as a supplement can prevent angiogenesis, in cell and animal experiments. The tests to date on humans have not been persuasive, although it may be that the form of supplement is not well absorbed and that further work is needed.

Catechins in green tea have also been found to effectively inhibit blood vessel growth in cancers. Indeed, the high intake of green tea in Japan is linked to lower prostate, breast and other cancers than in the West where green tea has not been traditionally a dietary player. Black tea lacks the anti-angiogenic potency of green tea, because the fermentation process required for black tea reduces catechin levels and, therefore, the anti-angiogenic effect of the tea.

So…. think green when it comes to the tea you drink when fighting cancer.

As few as 3 to 4 cups per day haves been found to have an effect on reducing cancers in humans.

Press here to listen to the TED talk about treating cancer with anti angiogens, given by Dr William Li, founder of the Angiogenesis  Foundation.  It is number two of several talks at that link so scroll down.

To prevent this, researchers have developed a number of pharmaceutical drugs like Avastin. So called protease inhibitors block the release of MMP tissue weakening enzymes.

Certain flavonoids, carotenoids, and lectins found in plant foods can function as natural protease inhibitors and can be part of the nutritional arsenal in fighting cancer.

Include abundantly as part of your cancer fighting diet.

Below are Foods and herbs that contain natural protease inhibitors and could play an effective role in a cancer fighting diet.

Strengthening and supporting the health of the tissue matrix is a good preventative cancer strategy. Nutrients found to effectively do this are gingko, pycnogenol and vitamin C. Press here to read more about the positive effect of vitamin C on healthy   tissue matrix that can make you more resistant to disease and infection, including cancer.

Another cancer fighting diet strategy is to induce cell death among errant cancer cells. Most cancer cells have abnormally high concentrations of anti-oxidants. One idea is to saturate the cancer cells with oxidants so that the cancer self-destructs.

Several chemotherapy drugs work on this premise. When it comes to a cancer fighting diet, several nutritional strategies have been used to promote apoptosis or cancer cell death.

When it comes to a cancer fighting diet, one method to induce cancer cell suicide researchers have explored is high dose polyunsaturated fatty acids (PUFA’s) supplementation.  Omega 3 fish oils have been used most effectively.

Scientists have observed that cancer cells contain fewer PUFA’s and, for that matter, a higher concentration of the anti-oxidants vitamin E and beta carotene than normal cells.  In fact, cancer cells don’t seem as able as their non-cancerous counterparts to use PUFAS, which more readily oxidize within cancer cell than in normal cells. If sufficient in number, the burst of free radicles from the oxidized PUFAs can destroy the cancer cell. Think about it as cancer going up in flames!

Like chemotherapy, this high dose PUFA supplementation is a short term therapy and ought to be carried out under medical supervision. During therapy, anti-oxidants are strictly controlled, in order not to bolster inadvertently the cancer cells’ defenses.    Caution:  Restricting anti-oxidants leaves a person at risk for heart and vascular disease due to the abundance of oxidized PUFAs that can damage vascular and heart tissue.   The Solution:  Tread cautiously on this front and only do high dose PUFA supplementation combined with anti-oxidant restriction in conjunction with your medical advisor.

Press here to read  more about the many benefits of Omega 3 oils in connection with cancer and other conditions.

….. don’t toss out the antioxidants with the bathwater.

Research confirms anti-oxidants are effective in preventing cancer.  Vitamins A and C and E have been found to reduce precancerous lesions in the throat, larynx and gut; beta carotene prevents precancerous lesions in the cervix; and Vitamins C, E and beta carotene prevent DNA damage in both smokers and non-smokers.  Press here to read more about antioxidants as part of a cancer prevention diet.

Several plant flavonoids have been found potent at killing cancer cells.  For this reason, they should play a role in any cancer fighting diet.

Cancer fighting flavonoids include lycopene, abundant in tomatoes, and resveratrol, rich in red wine, red grapes as well as raspberries.

Lycopene’s ability to slow growth of breast and prostate cancer is well documented.

While red wine is particularly rich in resveratrol, alcohol taxes the liver detoxification pathways and is best restricted or eliminated during active treatment.  Red wine in moderation can play a beneficial role in cancer prevention.  See cancer prevention diet for more on this.

Exceptions to the concern surrounding anti-oxidants therapy during cancer treatment are Co-enzyme Q10, Vitamin K and Selenium.  All three have been found to kill cancer cells by blocking cytokine production.  It follows, they can play a valuable role in the cancer fighting diet.

While our bodies make Co-enzyme Q10, we are often deficient.  Alcohol and liver disease depletes this semi-essential nutrient.  While found in trace amounts in meat and seafood, supplements are common and widely available. Co-enzyme Q10’s positive effects on heart disease are well documented.

Vitamin K is made by beneficial gut bacteria and is seldom supplemented.  It is abundant in cauliflower and brussel sprouts, as well as lettuce, cabbage, beans, broccoli and peas.

Selenium promotes cell suicide in amounts of 200 mcg per day. As mentioned previously, liver, seafood, whole grains including wheat, oats and rice are valuable dietary sources of selenium, provided the grains are not grown in selenium depleted soil. Supplements are readily available.Press here for more on the benefits of selenium as well as ideas on selenium foods.

One goal of effective cancer therapy is to get the cancer cells to behave properly. This includes, among other behaviors, responding dutifully to signals from the immune cells.

Some foods helpful at getting cancerous cells to behave normally or redifferentiate are the carotenoids as well as genistein contained in soy. See above for details on both these nutrients as well as the many dietary sources for soy.

To successfully beat cancer, it’s essential that the immune system kicks in and either kills the cancer or contains it.  An overwhelmed or fatigued immune system may be one reason why the cancer multiplied beyond a few errant cells in the first place.

There are several nutrients that scientists have pegged as strengthening the immune system, especially important in the fight against cancer. These include:

All of the above have been found variously to enhance the immune system including the activity of Natural Killer (NK) cells and regulatory T cells, which target cancer.  They are a good idea to include in any cancer fighting diet.

Press on the below links for more information related to Cancer Fighting Diets and related health and diet issues...

Press here to read more about the link between cancer and nutrition and a cancer fighting diet.

Press her to read more about cancer prevention diets.

Press for information on a breast cancer diet.

Press for more on a lung cancer diet.

Press here to read more about anti-inflammatory diets and the connection with cancer and other diseases.

Press here to read more about what inflammatory foods you should avoid when you have or seek to prevent cancer.

Press here to read more about the benefits of Omega 3 oils including their anti-cancer and immune-enhancing properties.

Press here to read more about the anti-cancer benefits of vitamin C and the importance of anti-oxidants generally  in your diet.

Press here for more on  the benefits of selenium and selenium foods.